Finally, a beautiful morning without any ‘weather extremes’ to deal with. Clear roads, 32*, a beautiful sunrise, and best of all, first time running with my partner in crime in a whole month! It had been so long and we had lots of catching up to do which made the run go by really fast! The fastest a run has gone by in a while and the fastest pace I’ve had in a while too! And the best company for sure! I’ll take it!

To think I used to be a loner and  really had no desire to run with anyone… I love the story of how Whitney and I met, about a year and a half ago…I have always said it must have been a God thing, because who makes a friend out at five in the morning! I had actually just started running in the early mornings a couple weeks prior in an attempt to fit my runs in before work. I was quite a scardy cat then and had only a few well lit streets that I would run on; it quickly became pretty boring. Then one morning, when I was almost done with my run I was surprised to see someone else out running. I think I waved and kept running, to then hear from behind me a friendly voice say, ‘Hey! I was just wondering, do you know of any early morning running clubs or groups around here?’ To which I replied something like, ‘umm, not that I know of, sorry…’ and kept running. Well I ran my last few blocks as we each when our separate ways, but then I started to think, ‘well that was stupid/rude Jessica…I should have at least struck up some conversation…what if it’s a God thing that your paths crossed.’ Well, I wasn’t looking to be apart of a running group lol, but it was that last thought that made me think I should try to see if I could find this mystery runner. Boy am I glad I did! Thankful for a small town and the fact that she liked to stick to the safety of street lights too; it wasn’t too hard to fine her! 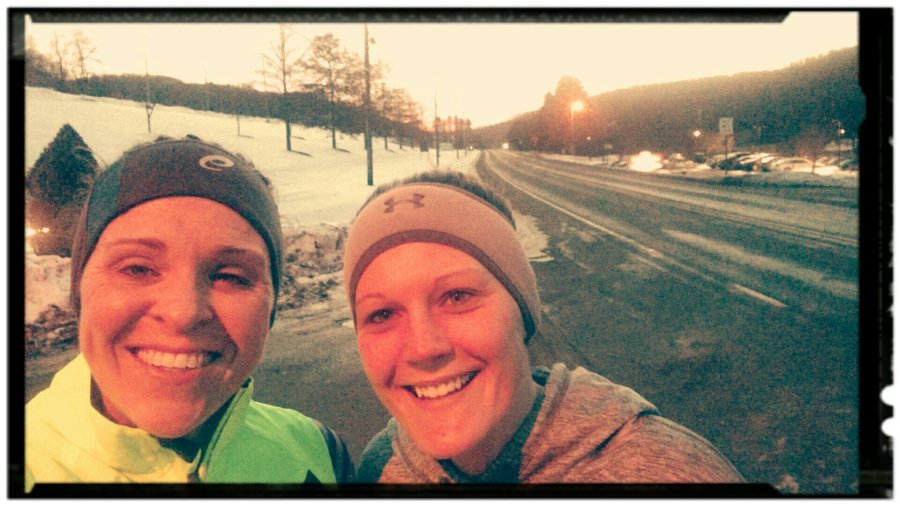 I’m not only thankful for a running partner I didn’t know I’d appreciate, but thankful for our friendship too! It’s been great getting to know one another through many, many miles of chats! (Who knew we actually chatted while we ran!? Lol 😉) You just never know when God’s going to bring someone into your life… maybe at 5 am while out for a run!

Cheers to a beautiful sunrise (#nofilter) and hopefully many more miles ahead! 🏃

Join 33 other subscribers
Follow Runner With A Hunger on WordPress.com